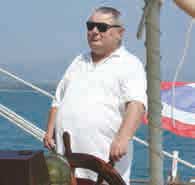 NEWS20Tom Howard sadly passed away in early April: so much of Tom's life over the past two decades was spent restoring and maintaining the schooner Seraph, which he sold a couple years back. The following was taken from a story SEA Yachting published about the resto-ration of the boat some time back. A favourite character in the Phuket yachting scene, Tom used to hold court at Jimmy’s Lighthouse re-galing people with his stories and adventures.

If you’ve been around Phuket for any length of time, it’s hard not to have heard of, or seen, the 112-year-old schooner Seraph. And this remarkable lady has quite a story to tell from her infancy as a Danish fishing boat to her being running aground in the Similan Islands in 1991. Seraph is the shortened version of Seraphim – one of the Archangels who protected God in Biblical lore. A six-winged angel, the Seraph sat at God’s right hand. His upper pair of wings covered his eyes (he may not look at his Master), the middle pair were for aeronautic purposes with the lower pair to cover his private parts. SY Seraph sails with a full complement of six sails/wings.Seraph was built in Denmark, and launched from a shipyard outside Copenhagen in 1906, as a ketch-rigged fishing vessel with no engine. She was as a “buy boat”, meaning she would go out to the fishing trawlers to buy their catch and then sell it at market. She had a wet hull - plugs in her side let the North Sea in keep the fish fresh. In the early 20s, she was fitted with an engine; in a fishing town in northern Denmark She fished the North Sea for 70 years, and then in the late 1970s, she was bought by a Dutch couple, who took her to Holland, and converted her into a liveaboard schooner, with a schooner rig. She sailed the Med and the Indian Ocean before ending up in Phuket in the late 80s. On New Year’s Eve 1991, while Seraph was moored off of Island 1 in the Similans, a squall hit, and the ship dragged anchor, as she headed towards a reef. The captain tried to pull off, but the steering broke, he lost reverse gear, and he couldn’t go backwards, moving forwards instead, landing Seraph on a reef. The skipper was inexperienced and Seraph should never have been moored in that location in the first place.Seraph’s insurance company wrote it off, and Mark Horwood bought if for a song, taking his dive company up to retrieve her along with caulkers to patch her up (the filled hr vessel with plastic bottles full of air to help raise her). Mark, who had a long love with classic schooners himself, took her down to Phuket to begin her long relationship with the Ratanachai Shipyard. Khun Pong, the senior woodworker at Ratanachai, was an apprentice when Mark first brought Seraph in, and to this day, he will drop everything else he’s doing when Serapharrives in the yard and won’t let anyone else oversee her repair. Seraph was originally made out of oak frame and oak planking but oak is not a good warm water wood, and as it has deteriorated, it’s been replaced with takean tong, which is much better because termites and worms don’t like it. Mark recovered, restored and re-rigged Seraph in her current configuration – a gaff-rigged schooner. He used her as liveaboard dive boat for over a decade, when diving was still a sedate sport in these parts, taking divers on gentle cruises in the Andaman and up to the Similan Islands, ironically where Mark salvaged her. When the market changed, and people became focused on the frequency of dives, Mark decided to sell her to Tom in March 2002, who had moved to Phuket following his retirement from the IT business in the UK. Tim McMahon, was the captain at the time, and she was refitted at Ratanachai from May-July of that year, then set sail for Pattaya, where she was leased to Gulf Charters for three years. She arrived in Ocean Marina in September of 2002.

21RegionalNEWSTom himself hails from Harpenden, a small town 25 miles north of London - nowhere near the sea at all. His father was in the Royal Navy during WWII as a submariner, where he developed his love for the sea. When Tom was about 7, his dad, after an encounter at a public house in London, conspired to buy a 45ft 1911 North Sea fishing boat - much to his mother’s annoyance - she got seasick in the bath. The boat took three years to repair, and Tom had one holiday on it, but unfortunately his dad died and the family was forced to sell the boat. So, you see, Tom puts his love for Seraph down to a genetic weakness.Tom actually bought his first boat, a small 30ft Beneteau named Bonne Coeur, with a friend in 1985. When the friend married, the pair sold the boat. “Marriage, new families and new boats don’t go particular-ly well together,” he recalls. Tom started his professional career in sales and then formed a computer hardware and software company, developing an e-commerce distribution system that unfortunately faltered with the dot.com crash. So, he decided to retire to Phuket in 2002 (He had been coming here on holiday since 1994 to compete in the King’s Cup).Tom brought Seraph back to Phuket in May of 2005, after she had fallen into disrepair and became termite-infected. Tom then hired Aussie Tony Knight as skipper and decided to keep the boat in Phuket. There was a huge refit at Ratanachai, which included a wrapping and gassing. She took a break in her refit and appeared as a Committee Boat in the first Phuket Raceweek in July (Tom created a trophy for the Seraph Clas-sic Class in that regatta carved from 500-year old wood from Seraph’s rudder). Seraph then went back into Ratanachai to complete her over-haul, emerging anew in September. She since appeared as a committee boat for the Bay and King’s Cup regattas and she also raced in the class she sponsored at Phuket Raceweek – problem being, stemming back to her days as a wet hull fishing vessel, she’s designed to sail with a lot of weight