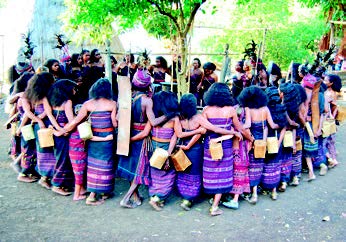 Patti Seery had in mind to welcome large families when creating the concept of Silolona Sojourns with tandem cruises, onboard Silolona and Si Datu Bua.The Silolona adventure is for ship explorers, and adventurers. It’s like living your own movie full of mystery and adventure: make friends that live the way people did in the Stone age, imagine dressing up like a real warrior, learning to throw a real spear, make a war shield, see mermaids, snorkel over real shipwrecks, ride horses, help to sail a ship, search for real dragons under smoking volcanoes, and maybe climb the volcano to look inside…

The Flores Archipelago is composed of a narrow-rugged island grouping strung with a chain of dramatic volcanoes. The landscape is beautiful in an untamed way, each island has its own traditional culture, handwoven textiles and languages, yet most people still live a tradi-tional life of farming and fishing.

The Islands of Eastern Flores include Alor, famous for its magnificent reefs and fishes, and ancient bronze drums still used in ritual today.

The Portuguese came in the early 1500s in search of spices, left a strong imprint of Christianity upon the islands and gave the name “Cabo das Flores” or the Cape of Flowers since they were astounded by the beauty of the underwater coral gardens lining the bays.

Although these islands are among Indo-nesian’s most beautiful islands, very few visitors sail these shores so you will have the secluded bays, beaches, and scenic anchorages virtually to yourself.

Alor is well known for the quality of its snorkeling and diving, with spectacular walls, varied coral and abundant fish life. Visit the hill top village of Takpala, home of the Abui tribe for a special ritual celebration in their ancestral ceremonial dance platform against a backdrop of their peaked traditional homes. Here you will see ancient bronze drums that are still an integral part of marriage negotiations as well as villagers clad in beautifully handwoven sarongs and brandishing bow and arrows still used in ritual in the everyday lives and for hunting.

Using Alor Kecil as a base, prepare for large pelagic action and schooling fishes. Other snorkel and dive sites include something for everyone including Babylon, the Edge, and mainland Alor. Many of the villagers in this area are weavers and women may approach you in dugout canoes to sell their hand-woven textiles with lovely fish and turtle motifs. Children in their own smaller dugouts responsible at an early age for providing fish for the family.

On the nearly inaccessible south coast, is a small village where men still hunt sperm whales using the simplest of technologies and boats with woven palm leaf sails. Whales are hunted in clan groupings by leaping from the boat onto backs of the whales with a handmade harpoon in hand. Although whaling is banned in many other areas, it is sanctioned here as it provides the major protein and trade item for the villagers. We will see a demonstration of traditional whaling and even have the chance to join the men in their small boats with palm sails.

Meanwhile, the women of the village collect cotton from their dry rugged land-scape to spin it into stunning bride cloths made with natural dyes, subtle coloring and geometric patterns. These bride cloths are collector’s items and amongst the most beau-tiful cloths in all of Indonesia.

Pre-dawn arrival, standing alone in the middle of the sea, Komba Volcano belches and spews fiery boulders with elemental force at regular intervals. Walk from a black sand beach to snorkel or dive amongst the corals

whose colours leap like gems that sparkle against the back-drop of black sand. Ile Ape is one of the most spectacular bays in Indonesia and villages line the thin rim around the base of the perfectly cone shaped volcano. This area is also well known for textiles, and an im-promptu visit to any small village will produce an amazing display of hand woven textiles

The scenic Straits of Eastern Flores.

The narrow straits between the islands of Lembata, Solor, and Adonara are spectacularly beautiful as volcanic peaks march along the shoreline within sight of one another as you pass through the straits of La-malkera to the Straits of Solor, overlooked by the ruins of an old Dutch fort in Lohaiyong, to emerge in the Straits of Larantuka.

Maumere, the capital of Flores Island.

Cruise to nearby Pulau Babi in the Bay of Maumere presided over by the gently smoking volcano, Gunung Egon.

Bid Farewell to the Crew on Silolona & Si Datu Bua and depart from Maumere’s Airport to Bali Denpasar.